The craze for taking selfies is not over.  In this case, people are often in trouble.  From time to time many such incidents keep coming.  In which people have lost their lives while taking selfies.  Also, in the process of taking selfies, funny events often happen with people, which makes one laugh.  One such video is going viral on social media these days. 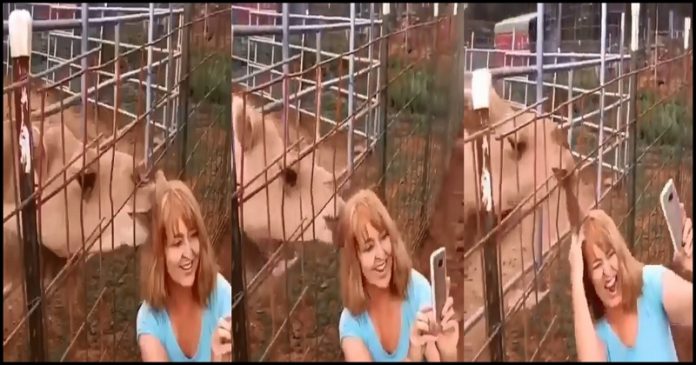 The viral video shows a woman taking a selfie that will be remembered for a lifetime.  Indeed, the woman was trying to take a selfie with a camel at the zoo.  During this time the camel makes some movements which cause great pain to the woman.  You too will have fun watching this.

In the video you can see that when a woman goes to the zoo, she sees a camel in the dark and starts taking selfies with the camel.

It can be seen in the video that the camel first approaches the woman and the woman starts clicking the photo.  However, after this he does not know what happens if he grabs the woman’s hair from her mouth and pulls it.  You can see that it breaks a lot of women’s hair.  This makes the woman scream.

The viral video was shared by IFS officer Praveen Angusami from his official Twitter account.  After watching this video, people are advising to stay away from animals whenever they go to the zoo.

The video has received over 5,000 views.  This video is going viral very fast.  After watching the video, people are giving different kinds of feedback on it.